The most reliable evidence of when the club was formed comes in the form of a Christmas card called "The Old Bowlers". This card was sent to a relation or a friend of a bowler and has since been presented to the club. The date of the card is 1913 and according to the message the club was celebrating its 40th anniversary at the time.

There is rumour and speculation that the present green was laid in 1910. Seemingly the present recreation ground was leased to the Town Council by Lord Pembroke in that year. By May 1912 the Mayor had raised an appeal to lay out the ground. Lord Pembroke provided paths and shrubs.The money raised was used to lay out the bowling green and two tennis courts, and the rest provided a large portion of the area for a childrens playground. A procession was organised to celebrate the grand opening of the recreation ground in 1912.

The Earl and Countess of Pembroke were present along with the Alderman, local church dignitaries and the local police. Lord Pembroke officially opened the Recreation Ground. The bowling green was opened with a match on three rinks between a team of townsmen selected by E. Musselwhite and twelve members of the Corporation. The Earl of Pembroke rolled the first jack. Later in the year a public meeting was called to form Games Clubs. Mr G Bell moved that a bowls club be formed with an annual subscription of 2/6d. 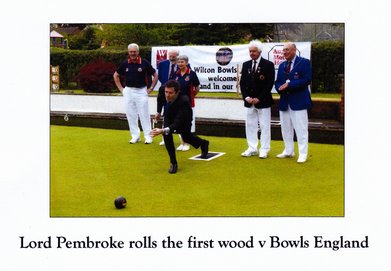 Wilton Bowls Club was born and our registration with Bowls England dates from 1912. We provided County Presidents for the Wiltshire Bowling Association in 1921, 1957, 1969 and 1995.

One of the most important dates in our history was the formation of the ladies section in 1972. We became trendsetters in 1984/1985 (when our new pavilion was built) when we adopted a new constitution giving our ladies equal rights to our men. We continued to be trendsetters when in 2002, to celebrate our 90th anniversary, we asked the two County Associations to organise a mixed team to play us. This was the first such match in Wiltshire.

Over the years both our ladies and men have had success at County level, and we continue to have bowlers who represent Wiltshire. Wilton Bowls Club celebrated its centenary in 2012 with matches against Bowls England,   Bowls Wiltshire and Salisbury BC, who also celebrated their centenary that year.